Home/Search Results for "you must set forth at dawn" 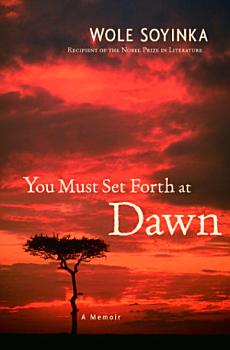 
The first African to receive the Nobel Prize in Literature, as well as a political activist of prodigious energies, Wole Soyinka now follows his modern classic Ake: The Years of Childhood with an equally important chronicle of his turbulent life as an adult in (and in exile from) his beloved, beleaguered homeland. In the tough, humane, and lyrical language that has typified his plays and novels, Soyinka captures the indomitable spirit of Nigeria itself by bringing to life the friends and family who bolstered and inspired him, and by describing the pioneering theater works that defied censure and tradition. Soyinka not only recounts his exile and the terrible reign of General Sani Abacha, but shares vivid memories and playful anecdotes–including his improbable friendship with a prominent Nigerian businessman and the time he smuggled a frozen wildcat into America so that his students could experience a proper Nigerian barbecue. More than a major figure in the world of literature, Wole Soyinka is a courageous voice for human rights, democracy, and freedom. You Must Set Forth at Dawn is an intimate chronicle of his thrilling public life, a meditation on justice and tyranny, and a mesmerizing testament to a ravaged yet hopeful land. 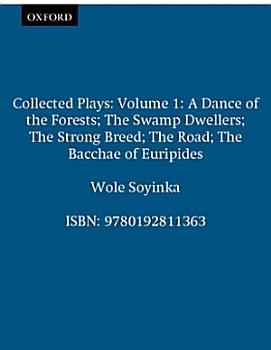 
The five plays in this collection are linked by their concern with the spiritual and the social, with belief and ritual as integrating forces for social cohesion.-- 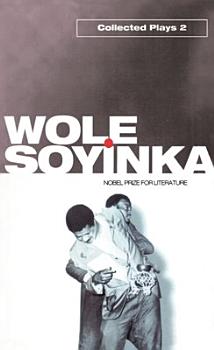 
The five plays in the first volume are linked by their concern with the spiritual and the social, with belief and ritual as integrating forces for social cohesion; the plays in the second volume trace the ironic development and consequences of 'progress.' All plays are based around themes in Nigeria.


Wole Soyinka was the first African to be awarded the Nobel Prize for Literature. In this year's prestigious series of Reith Lectures, Soyinka considers fear as a predominant theme in the world of politics 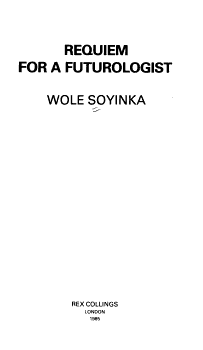 
The first African recipient of a Nobel Prize in Literature offers a thought-provoking analysis of Africa's current crises while making recommendations for cultural and political renewal, exploring the region's history as it relates to the histories of other nations and critically assessing Africa's stances on race and religious tolerance. 10,000 first printing. 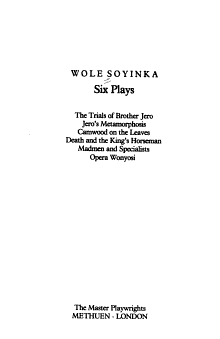 
Madman and Specialists examines the way in which war exposes and clarifies human conduct; Opera Woynosi is adpated from Gay's The Beggar's Opera and is a fierce assault on totalitarianism; and four other Wole Soyinka plays are included in this volume. 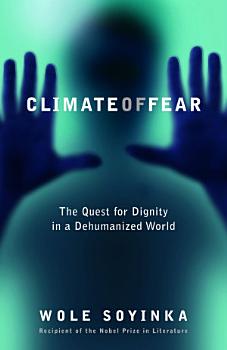 
The Nobel Prize-winning author examines the dominant role of fear in today's global political environment, assessing the changing face and implications of fear, the conflict between freedom and power, the complex motives behind horrifying acts of violence, and the meaning of human dignity. Original. 20,000 first printing.